On a day in the future, these two gigantic wind turbines will turn in the shallow waters of the North Sea to generate CO2-free electricity for a new industrial age. Each wheel has a diameter of 250 meters and converts the kinetic energy of the wind into a rotary movement with rotor blades, which are designed as two endless spirals and are connected to each other by two ring-shaped blades at the apex of a torus. The rotor of the wind turbine has a stable lattice shell structure that is formed on the virtual surface of the cylindrical torus. The grid shell itself forms the rim of a spoked wheel, which is braced to a hub by means of barely visible steel cables. The wheel axle is carried by a huge fork, which is connected to a foot anchored in the seabed via an azimuth bearing. Several motor-generators arranged in a row, each designed as synchronously excited three-phase machines, are housed within the hub. The kinetic energy of the wind is converted into a rotary motion by the rotor blades, whereby the flow is slowed down. According to Bernoulli's theorem, this increases the pressure in the flow tube so that it expands. The rotating grid shell is perceived by the incoming wind as an obstacle that needs to be avoided. Therefore, part of the flow is directed to the outside of the rotor, while a second part of the flow is directed towards the axis of rotation and flows through the rotor from the inside. Therefore, the flow has a cone angle both on the outer surface and on the surface facing the axis of rotation, which is decisive for generating a torque on the axis of rotation. A tangential drive force acting in the direction of rotation and a thrust force acting leeward are derived from the lift force produced by the rotor blades. While the tangential driving force causes the torus to rotate, the resulting thrust must be absorbed by the support structure of the RES Giga Wheel. The suction side of the rotor blades in the windward half of the lattice shell is oriented towards the inside of the orbit and changes its orientation at the outer and inner apex of the torus in the leeward half of the lattice shell to the outside of the orbit. The freely permeable center of the Res Giga Wheel must be calibrated in such a way that a fluid dynamic equilibrium is established between the Venturi effect occurring there and the expansion of the flow tube caused by the Bernoulli effect. Just like a lens that either converges or diverges incident light, the torus shape, due to the Venturi effect, causes a convergent flow to the rotor blades facing the axis of rotation, while the Bernoulli effect causes a divergent flow to the rotor blades on the outside of the torus. This means that the fluid dynamically effective areas influenced by the torus are significantly larger than the structural dimensions of the grid shell itself. In this regard, the Res-Giga-Wheel follows exactly the philosophy of R. Buckminster Fuller, who once said: Use the forces - don't fight them!

Doomsday mood in a landscape characterized by coal power plants and heavy industry while a light breeze pushes away foggy swaths exhausted by cooling towers and chimneys. A new dawn is announced by two giant wheels spinning slowly and quietly for the carbon free generation of electricity in a new industrial age. Each wheel has a diameter of 250 meters and transforms the kinetic energy of wind with two endless spirals of rotor blades connected to each other by two ring shaped wings to form a stable grid shell structure on the virtual surface of a cylindrical torus. The grid shell structure itself serves as a rim for a spoked wheel tensioned by barely visible steel cables which are connecting the rim to a giant hub at the center. The wheel's axle is carried by a huge fork connected to azimuth bearings. Several motor generators arranged in a row are housed by the hub. The kinetic energy of the wind is extracted by the rotor blades while the flow at the same time is obstructed by the rotating grid shell structure in a combination of two dynamic effects: Firstly to extract energy from the incoming flow will slow down the flow speed and simultaneously increase the pressure within the the flow column and secondly will the obstruction of the flow passage cause a deviation of the incoming flow. Therefore having a conical angel on the outer side of the torus the flow it is guided away from the axis of rotation and on the inner side of the torus it is guided towards the axis of rotation, attacking the rotor blades opposite at the outward half and the inward half of the torus. Therefore uplift forces point in the direction of rotation at each segment of the rotor blades and can be divided in a tangential rotation force and in thrust that has to be taken by the load bearing tower. Looked at in cross section the outer parting and the inner parting of the cylindrical torus are a turning point where the orientation of the rotor blades changes from the outside to the inside of the orbit. The central void of the Res Giga Wheel has to be calibrated in a way that a fluid dynamic equilibrium can be created between the Venturi effect and the widening of the fluid tube caused by the Bernoulli effect. Just like a lens is capable to either converge or diverge incoming light, the torus of the Res-Giga wheel is capable to converge incoming flow on its inward surface by the Venturi effect and to diverge incoming flow on its outward surface by the Bernoulli effect. This means that the fluid dynamic dimensions of the torus surpasses its structural dimensions. In this aspect the Res-Giga tube exactly follows the philosophy of R. Buckminster Fuller who once said: Use forces, don't fight them!

Around ten giant wind turbines with an output of 50 MW each are needed to equal the energy output of one lignit power plant that is polluting the atmosphere with climate-damaging gas. Repowering energy production by means of next generation wind turbines would solve the problem.

These two RES - Giga Wheels present themselves as a majestic appearance in the north German lowlands and produce electricity in previously unknown quantities with a slow and harmonious turning movement. 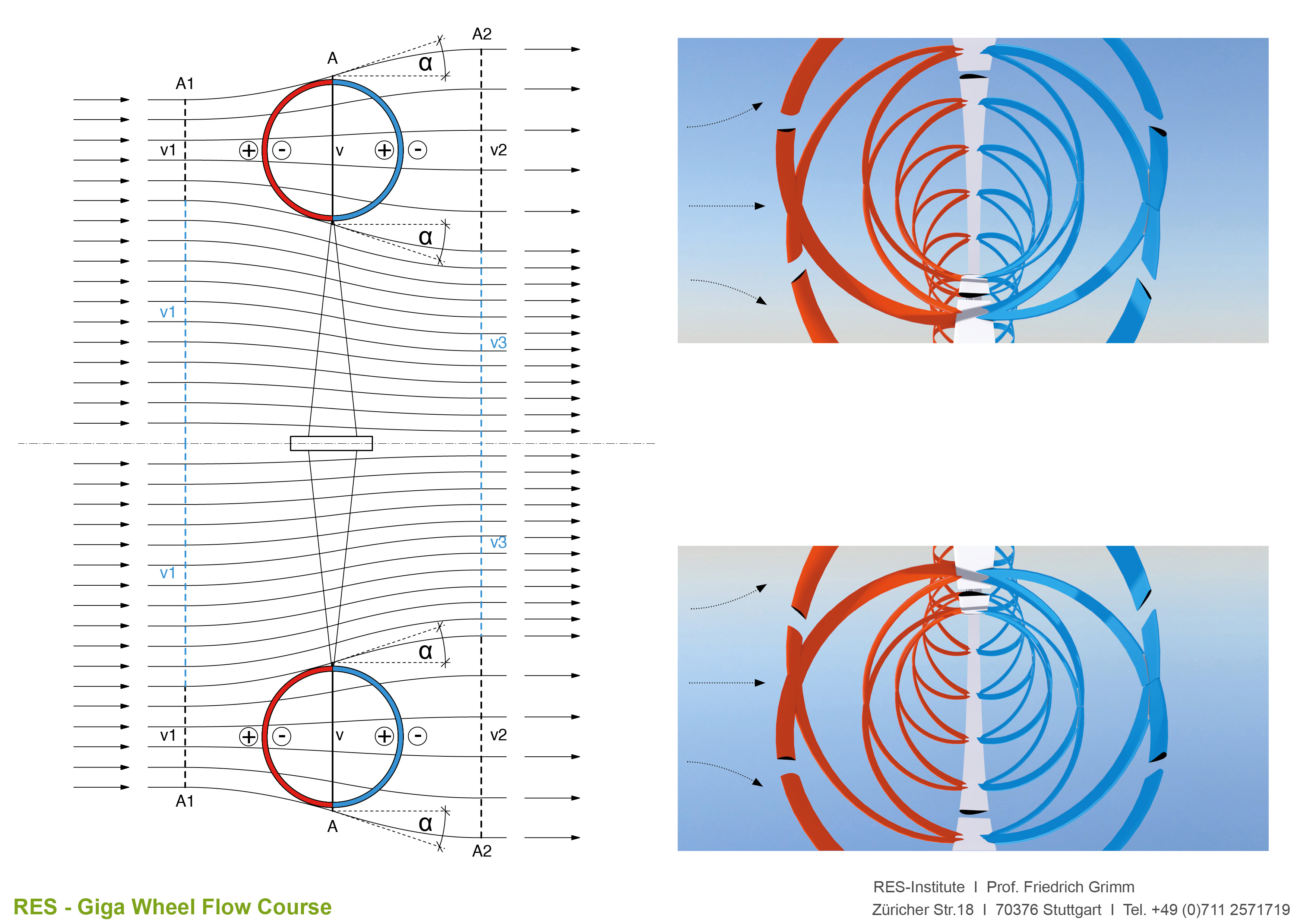 Drawing 1 - Manipulation of the incoming Flow

The drawing on the left shows the influence of the rotor on the incoming flow. The widening of the flow column as well as the Venturi effect at the central void cause a conical angle of impact on the outer half as well as on the inner half of the torus. The conical angle is crucial to create torque on the rotation axis of the RES Giga Wheel. The graphic on the right side shows flipped over rotor blades which change their orientation to the orbit at the inner and outer turning of the torus.